Don’t Reject Yourself In A Job Search

If you want to speed up your job search, adopt the mindset of a successful salesperson. Sales professionals know a few things about rejection that can help jobseekers. They know you shouldn’t assume rejection if you haven’t heard back from a prospect. They know that it’s often possible to overcome an apparent rejection or hesitations about the services you are offering. And they know how to skillfully keep in touch when there’s no interest now.

Many of my new job search clients, however, are too quick to see rejection and give up. They explain away their long searches by saying things like “they never got back to me,” or “they turned me down so that’s that” or “we lost touch.” When I hear these explanations, I think about missed opportunities.

If you can adopt the mindset of a sales professional, you’ll shorten your search through seeing and creating new opportunity in the face of rejection. Here are some examples that illustrate how you can adopt this sales mindset in a job search.

They Turn You Down After An Interview

When someone you’ve interviewed with tells you “we’ve decided to move forward with someone else,” you may feel like you’ve just wasted a lot of time trying to land this offer. It’s only game-over, however, for this one role. Try to turn their rejection into a networking opportunity that can land you an interview somewhere else. Ask “well now that you know what I can do, is there anyone else at your organization, or elsewhere, who you can suggest I speak with?”

One of my clients did just that. She had several interviews at a Fortune 500 firm, yet they ultimately decided to go with someone else. Adopting the “sales professional” mindset, she called the hiring manager at around 8:30am, before the day’s meetings started, to improve her odds that he would pick up the phone. And it worked. Once on the phone with him, my client turned this rejection into an offer in another part of the company by using the following approach:

The story doesn’t end here. She followed up on the referral and obtained another interview, but they rejected her for that position as well! So she repeated the process, and got yet another referral. On this third try, she got the offer that she accepted.

Note in this example how my client followed up by calling rather than emailing. If you email following a rejection, the hiring manager (perhaps feeling uncomfortable after having just rejected you) either won’t respond to the email or will give you a vague, non-committal answer. If you call and get them on the phone, however, you’re putting them on the spot, and enabling something different to happen. If you’re gracious and wish them well (and assuming they liked you personally), they often feel bad they rejected you and want to help!

This approach won’t get you an interview in every situation, of course. Nevertheless, you have nothing to lose by trying, and a job offer to gain. 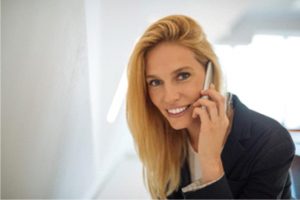